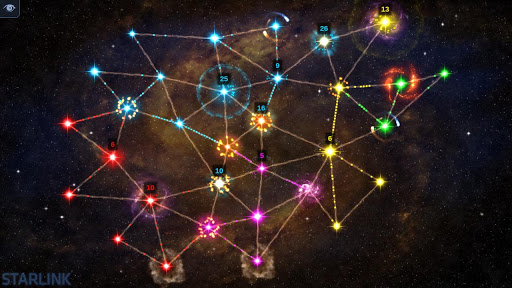 Starlink Description: Starlink is a tactical real-time strategy game about galactic domination. You start by controlling a star in a procedurally generated galaxy, and each star you control produces ships. You can direct ships to other nearby stars that happen to be connected via hyperspace routes in order to capture them, but beware other hostile factions trying to do the same. Don't let your guard down, or you will quickly find your stars overrun with enemy ships.

If the AI proves to be too much of a challenge, invite a friend (or five) to play with you, and share control of the galaxy with them, or join opposing teams and compete against each other -- it's all up to you.

To make the flow of the game even less predictable, each player can choose from a large list of abilities to take with them into each match that can drastically change the way the game plays. Some abilities are defensive in nature, some offensive, and others are a mix of the two. There are even abilities that let you reshape the galaxy to your advantage, collapsing or creating new hyperspace routes between stars.

And if that's not enough, certain abilities can be used in a sequence for even more devastating effects.

Can your galactic empire prevail and rise up above others? There is only one way to find out...

+2 points IAP should now work while offline as well.