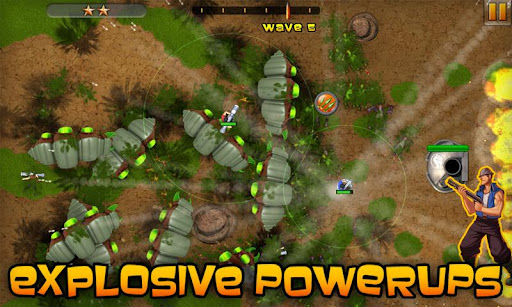 Boom Brigade 2 Description: Take command and draw paths for your Troopers and watch them lay waste on the rampaging alien horde! Issue orders in real time or use the Tactical Mode to plan your maneuvers. Unlock powerful upgrades and interesting bonus game modes as you fight your way through the campaign with three exciting chapters. Load up and save the Earth now!

Experience the first chapter for FREE and unlock the full game and remove ads with an in-app purchase!

"Like the idea of strategy and defending your base from the enemy, while taking down the enemy by yourself? Then the Boom Brigade 2 app from developer 10tons Ltd is just the perfect app for you!"
- androidappreviewsite.com 5/5

"Anyone that wants to engage in a little alien annihilation need to check this game out."
- Touch Arcade 4/5

"A great balance between action and strategy"
- Apple'n'Apps 4/5

Boom Brigade 2 is an action packed casual strategy game that puts you in the commander's seat. It features a hand-crafted campaign with three chapters and 30 missions. In addition there are several quick game modes.

You can issue orders in real time or pause the game and think about your moves in the Tactical Mode. Troopers can also concentrate their fire on priority targets and collect a variety of powerups.

Boom Brigade 2 has all the characters from the original Boom Brigade plus a new character: "The Sniper". Just set the priority targets and watch as he snipes them away from a distance.