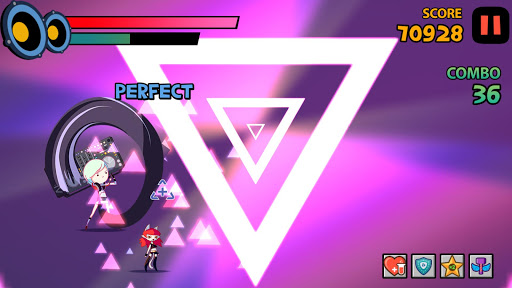 * A legendary paid game! Now you can enjoy it for free! *
Radiohammer topped the charts around the world upon its release.
Radiohammer topped the music game chart at the Google Play Store in 40 countries at once.
New characters, new stages, various songs and the shocking final boss!
You play against players around the world in Ranking Mode! You can now play for free!

* Introduction of Radiohammer *
Radiohammer is an exciting and easy-to-play rhythm action game in which you play by tapping on the screen to the rhythm.
Anyone starts off easily but as you progress you will need to demonstrate more rhythmical and flashy moves!
A variety of characters and backgrounds! Charming enemies and shocking boss stages!
Enjoy this game with self-produced 1100 songs and many more stages!

* Who can easily start, but in the end everyone can not afford! *
Click on the line with the rhythm of touch? Too easy, right!
Of course, easy to start, but with the improvement of the level of music will become faster and more difficult!
In order to achieve at least this level of recognition by the music of God. To challenge it!

* New stage! New character! Play with a cool girl, DJ Numi! *
The new character of Channel 4 is an electronic music DJ Numi! She is up for the grand finale.
A diverse array of electronic music including Dubstep, Nu jazz, Acid music are newly added!
Over 40 new songs including remakes are included for this update!
Game World's final boss Z-Dragon! You will battle against a good-looking... Excuse me... A dragon!

You outplayed Buddah Handsome and Rock Spirit. It's time to challenge for the level of human limitations!

Currently the OS 4.0, please note that do more than just support!!

「version 1.4」
Hit timing became easier.
No need to achieve all three Stars to open Channels
Added more languages support: French/Spanish/Portuguese/Russian/German
You can choose the language in Option!
「version 1.3」
Downloading issue fixed.
You can continue to play where you retire.
You can unlock the DJs in Practice / Ranking mode by LP.
The required number of stars to open Channel is changed.
a few bugs fixed.