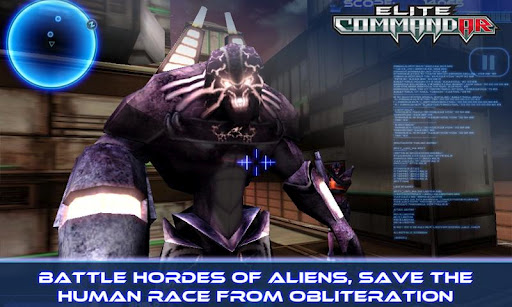 Elite CommandAR: Last Hope Description: Please note: To play this game your phone must have a gyroscope, min. 1GHz processor, and 512MB+ ram. The movement is most responsive on phones running Android 4.0 (Ice Cream Sandwich). This game is not designed for tablets.

• LOCK & LOAD
As Earth nears total destruction by alien forces, an elite space commander is tasked for a last-ditch mission to save the planet.

Equip yourself with a one-of-a-kind suit and the Liberator Pistol, because you are about to embark on a risky journey to fight for the survival of our planet and put some holes in the alien's planet.

• IMMERSIVE CONTROLS WITH THE LIBERATOR PISTOL
Turn your world into a digital battlefield! Aim the pistol and pull its trigger to shoot enemies and targets in the game. Use secondary pistol buttons to raise your shield, change weapons, select special weapons and reload. Earn points to buy or upgrade guns and special weapons.

• DON'T HAVE YOUR OWN LIBERATOR PISTOL?
Going head to head with alien foes? You won't get far without the Elite CommandAR gear. Test out the free demo level to see what the aliens are made of, and then head over to the website to learn how you can get your hands on a Liberator Pistol and win the war for humanity.

• AppGear TOYS - AMPLIFIED REALITY
Win the war against boredom! AppGear is a line of apps that interact with collectible figures and customizable toys to create a new reality in gaming.

This is the initial release version. Multiplayer Co-Op and AR Mode will be coming in the next version.
* Note *
It has come to our attention that in certain circumstances users can experience a crash loop and be unable to play the game. If the game constantly crashes for you, try uninstalling and reinstalling the game, this should fix the issue.