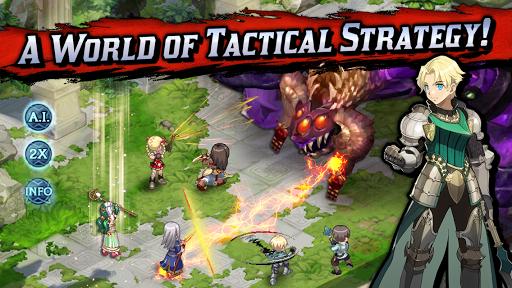 The old King has gone mad, the Prince is missing, bandits roam free, and angry dolls march in the streets. As the Kingdom slowly descends into murderous madness, a Hero needs to rise and restore the peace. Welcome to the world of Brave Brigade: Hero Summoner.

Select your Hero and then lead an elite Mercenary team under your banner to glorious victory. Recruit Mercenaries that will fight and die for you or you can capture monsters to bend to your will!

This is a tale of Heroes, a tale of courage, a tale of your journey through the hostile frontier to save a Kingdom from destruction.

FEATURES:
• CHOOSE your specialized Hero, directly affecting your squad configuration and combat style
• BATTLE in different worlds, each with its own challenges
• COLLECT from over 200+ Mercs, each with its own exclusive set of skills and abilities
• ENHANCE AND EVOLVE your Mercs, dramatically transforming their quirks, abilities and appearances
• DEPLOY a balanced squad of Mercs to heal, attack, wield magic and provide cover in each fight
• COMPETITIVE PVP tournaments with players from around the globe
• EXCITING ongoing events to participate in for unique game bonuses
• TEAM UP with existing friends or make new ones and tackle challenging Battle and Raid Bosses

Hymn of Halcyon...
When the black record keens and moans
Know they stir… the dragons’ bones
Fire will come and thrones shall burn
Turn the pages, come and learn
Age old tales, steep in blood and glory
Follow the signs and read the story
About the world and oblivion
And the purifying light of ten million
Heroes will rise and darkness shall fall
Champions heeding the dragon’s call…

Enlist in this journey as a free game download on Android phone and tablet devices.

****Compatible with devices with Android version 2.2 and above
By playing this free Brave Brigade game download you are agreeing to our terms and services:
www.zqgame.com/term.php

General:
General UI fixes.
Optimization(s) for future update(s).
Improvements to overall stability, security, and other minor adjustments have been made to enhance the user experience.
New Features:
New tunes & jams added. Explore the world of Brave Brigade while bobbing and nodding your head to some fresh new music!
Bug Fixes:
Behind the scenes bugs have been resolved for better server performance.