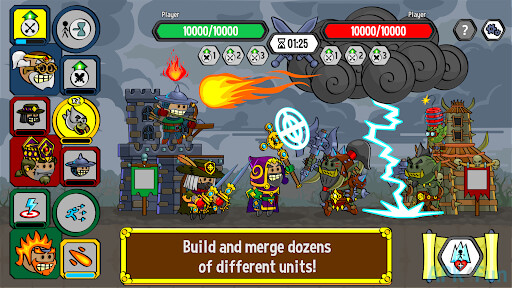 BATTLE CASTLE is a combination of Real-time strategy and Tower Defense! You have to siege enemy castles and defend your own!

🧙‍♂️ Heroes - Collect and upgrade heroes! Each hero has his own class and a unique set of abilities!

🛡 Army Upgrade - Merge and upgrade your army's warriors as the battle progresses. Make your army invincible!

🔮 Magic - an extensive arsenal of combat and support spells! As well as their combinations! Create new spells right during the battle!

🛠 Engineering - allows you to speed up the training of your army and magic, make warriors stronger and improve the protection of the castle.

- Change the production priority at any moment of the battle: army, magic, engineering
- Merge-mechanics allows you to create unique combat units and spells
- Collect a full set of heroes that suits you best
- Explore and experiment!

On the island of Taldoran, there are everlasting battles between the kingdom of the people of Algorion and the horde of greenskins! You are a young king of people who just has to prove that he is worthy of the crown.

Or maybe you are the great chief of the Greenskins that wants to unite the whole horde?