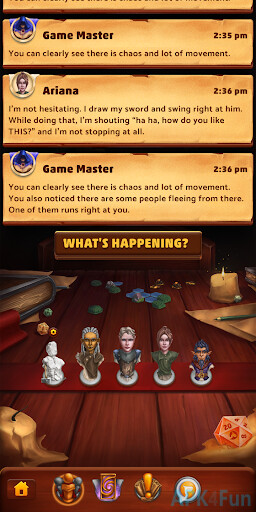 Game Master narrates: “You, four heroes, finally opened the door, the room is on fire, smoke is everywhere.”

One of the players responds: “Uh! I hold my nose and slowly proceed into the building.”

Game Master: “As you proceed you can see a silhouette of… an orc! He is laying on the ground, his sword next to him.”

Another player: “Is he breathing?…”

The Game Master is the narrator and referee, players role-play their characters by describing what they do and what they say. Sometimes you roll a dice to see the outcome of an action, sometimes you battle. You play it on mobile. The most important thing is you have fun with your friends!

Features:
- GMs now can create NPC / Monster and add through actions in the party.
- All players who leave a campaign leave behind an NPC in the shape of their character, so the GM can get them a proper farewell
- Users now can change the size of most of the smaller texts in the app (mostly chat messages and descriptions)
- Device setting was separated from the account and now has it’s own screen
- Minor layout fixes and improvements