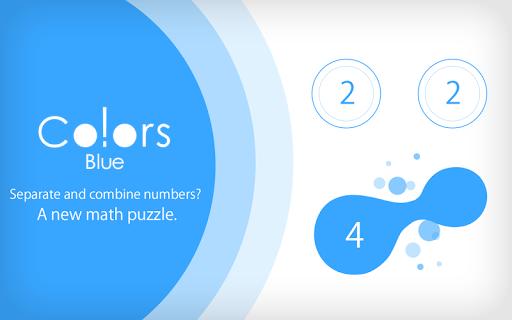 Co!ors Blue Description: Kuma the Bear, the creator of several easy-to-play games, has started a new game series ""Co!ors Project""! This series is focused on pursuing originality while using a simple design. In its first game Co!ors Blue, you explore arithmetic by breaking down and combining numbers!

There are water droplets with numbers written on them and circles to put them into. When you use two fingers to split a droplet, the number inside will split in half too! Push two droplets together, and they will merge, adding their numbers together.

Divide and combine to make the number written in the circles. You cannot split apart odd numbers, so be careful!

The controls are super simple!
・Tear apart and put together water droplets with numbers written on them to create the number written in the circles.
・If you can put all of the droplets in the circles without any left over, you beat the stage!

《Features》
◆It's a new sensation to tear the droplets apart and put them together!
◆Both children and adults will enjoy using their heads to create the right numbers!
◆The pleasant sounds are addicting! Play with the volume on!