Pharaoh's War by Tango (me.tango.pwar): Build an empire and lead your army to victory in this desert warfare RPG game ... Read More > or Download Now >

Pharaoh's War by Tango for Android 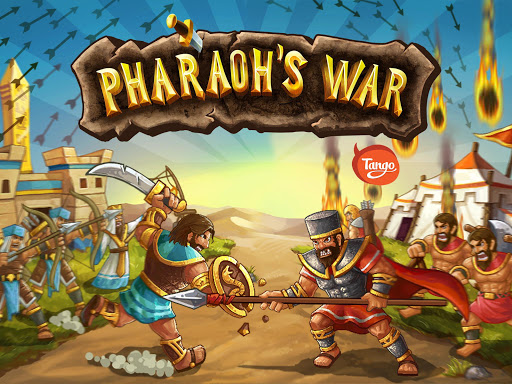 Pharaoh's War by Tango Description: Your ancient kingdom is under attack! Can you assemble an army strong enough to defend it? Engage in tactical combat games with your heroes to command and conquer enemies of your kingdom in Pharaoh's War for Tango! Play this FREE hit strategy and combat game, you’ll build a city and prepare your army for epic multiplayer fighting games.

Start your mission and RPG adventure by using your hero and amy. Lead your army into desert battles to gain countless points, coins and gems for successful combat, or earn resources by fighting and building up army barracks, gold mines and more. In multiplayer fights against other Pharaohs, you gain his resources for your kingdom in desert and and build up your empire!

Become the most powerful army commander by creating alliances with your friends online! Use your strategy skills to create the strongest army in order to defeat your opponent in epic multiplayer war games, and challenge other warriors that cross your path to the super hero in battles.

►Wisely use resources like gold and crystals to expand your empire and enhance your army.
►Upgrade your hero to gain various combat skills, abilities and weapons.
► Strategically arrange your army board to maximize the fighting power and defeat your enemy with minimal lost.
► Form multiplayer alliances with other players online from around the world
► Send and receive messages to and from other players who have Tango account.
► Battle other heroes in PVP mode to claim the top position in your League.
►Earn various bonuses on daily basis to help expand your vast empire

~~~~~~~~~~~~~~~~~~~~~~~~~~~~~~~~
► Build Your Empire
City building: gather and manage resources like gold, minerals, gems and workers
Build and expand your empire by upgrading your camps, palaces, altars and more
War games are on! Prepare yourself by using your coins, crystals and gems to outfit your troops with equipment and weapons

►War Strategy and RPG
You’ll be role playing as the commander of your own powerful army
Gather resources to recruit more warriors to battle
Use real time strategy and test your skills! Place warriors on the board where you think they’ll be strongest as you battle your enemies.
Equip your army with items from your bag to make them stronger

►Multiplayer Fighting, PVP and RPG Games
Build alliances with other players online
Online multiplayer games allow you to fight, command and conquer others across the globe
PVP mode let’s you play with friends or enemies online
Keep fighting enemies with your heroes in PVP mode

Lead your army through multiple combat games and defend the honor of your empire. Your kingdom depends on you to deploy your strategic skill and prepare for dangerous warfare. Prove yourself and download Pharaoh's War for Tango today! It is FREE to play!

For support for this strategy RPG and PVP game for Tango, visit:
http://support.tango.me/home