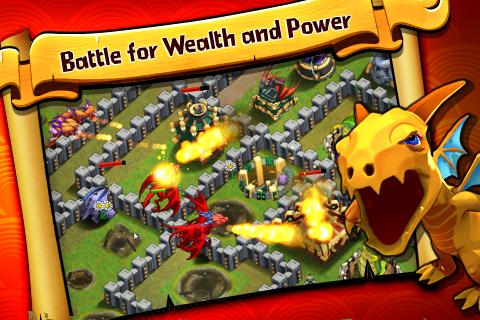 Battle Dragons Description: Battle Dragons is the game where you build a Fortress and Command a Dragon Army! Battle hundreds of thousands of other players worldwide in this Battle & Build game from critically acclaimed & Google Play "Top Developer" Spacetime Games. Battle Dragons is one of the best combat strategy or best real time strategy games you'll play!

***** "All about training and deploying dragons to destroy rival villages. Come on, how much cooler does it get than that?" - Gamezebo
***** "Battle Dragons is that rare title that is literally hard to put down" - Arcade Sushi
***** “You can really see Battle Dragons shine while attacking a fortress...” - MMOhuts
***** “I love the smell of Battle Dragons fire and brimstone in the morning. And the afternoon. And evening.” - Daenerys Targaryen

If you’re reading this, you probably tapped the down arrow in the Description. Thanks, we appreciate your curiosity. We thought you were the type of person that was pretty discriminating about the stuff you put on your fancy mobile devices. So…we wanted to give you some stuff worth reading to help you decide whether or not to install this. SPOILER ALERT: we think you should.

Here’s what you do in this game – pretty simple, actually. You command your army of Dragons as they raze and plunder valuable resources from other players. You use those resources to grow more powerful. You Battle. You Build. You reign supreme.

We think it’s pretty fun and it don’t cost nuthin’. We had fun making it and hope you have fun playing it. Why not try it? C’mon…tap that install button up there.

Here are some other things we think are cool about the game:
• Build a Dragon Fortress with over 43 different buildings – they’re (virtually) real, and they’re spectacular.

• Raise an army from 10 different types of booty-kickin’ Dragon units that will pillage and plunder as you command. You can upgrade them all too. You’ll never get a chance to tell a Dragon what to do in real life!

• Defend your Dragon Fortress with 13 different types of structures that can be upgraded all the way up to bad mamma jamma status – and as J.R.R.R.R.R.R. Tolkien and George R.R.R.R.R.R. Martin so notably wrote, “Bad mamma jamma Dragons are awesome.”

• Want to start a Dragon Tribe with friends? Good, you should. You can help each other by speeding up upgrades and boosting production of Gold and Sheep (yes, we said Sheep). Get awesome Dragon stuff faster.

• Join with Facebook friends to help each other do all that speedup and boost stuff we just mentioned – ‘cuz that’s so much more valuable than looking at photos of what they had for lunch or their kitty cats doing adorable things.

• Your Dragon tribe gets to fight against other Dragon tribes in a leathery winged battle for supremacy. That’s a Constitutional right, by the way, not a privilege. That’s true – you can look it up.

• Optimized for all the latest displays on all these fancy space age devices we all carry around now. If they’re going to go through the trouble of making these things, we might as well take advantage of it, right? Pixels are a terrible thing to waste. Plus it’s no fun to squint – unless you are doing some kind of Clint Eastwood impression.

• Oh, and did we mention your Dragons eat sheep? You just can’t put a dollar value on that kind of entertainment. But that really doesn't matter since the game is free anyway.

Check Us Out At:
http://www.battledragons.com

Battle your way to the top of leaderboards in four new categories!
Prizes and flags awarded in each leaderboard category for finishing among the top 10 players
Prizes and flags awarded to the top tribe in each leaderboard category
Leaderboards reset and prizes are granted every two weeks
Attack replays are now saved and can be viewed in Battle History
Players are now grouped by language in public chat
Added Russian, Japanese, and Korean language support